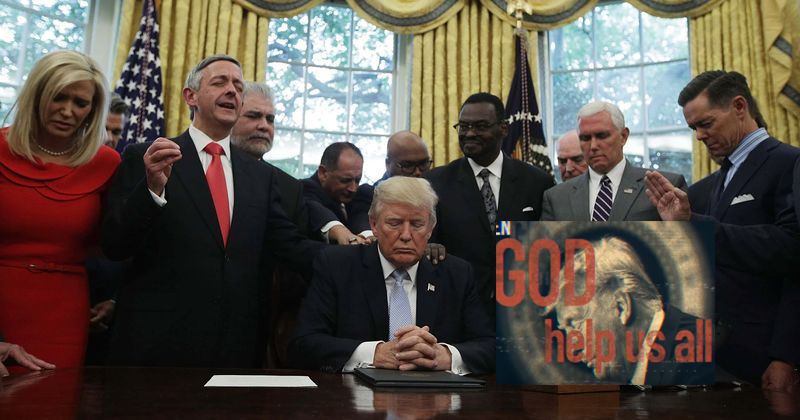 Evangelicals are being raked over the theological coals by the anti-Trump Republican group; The Lincoln Project. The MAGA Church is metaphoric, but describes the cultist devotion bestowed upon Trump.

The well documented supporter profile of the present oval office regime will drink the kool-aid even with dead canaries laying everywhere. If Jesus returned today standing opposite of Lucifer, with Lucifer dawning a mangled, ripped-up Trump costume suit, supporters would choose the starkly revealed fallen angel from heaven boasting leadership residence in hell.

“Evangelicals, Christians of every denomination, and believers of every faith have never had a greater champion-not even close-in the White House, than you have right now,”

The Lincoln Project has produced a video taking aim at President Donald Trump, mocks Trump supporters for worshiping in “The MAGA Church.”

The debut video juxtaposes Trump and his evangelical supporters with actual Bible quotes. “Evangelicals, Christians of every denomination, and believers of every faith have never had a greater champion-not even close-in the White House, than you have right now,” Trump said in a clip that begins the video. As Trump’s speech plays, a quote from the King James Bible’s Matthew 7:15 is shown. “Beware of false prophets, which come to you in sheep’s clothing, but inwardly they are ravening wolves.”

The Lincoln Project boasts prominent Republicans founders such as George Conway, a Republican lawyer and husband of White House counselor Kellyanne Conway; Jennifer Horn, former New Hampshire Republican Party chairwoman; and Steve Schmidt, a strategist for George W. Bush, Arnold Schwarzenegger, and John McCain. It was announced in December. The organization’s website states that its mission is to “Defeat President Trump and Trumpism at the ballot box.”

The “MAGA Church” may not be a physical church today, but don’t be surprised should that concept take flight. Stranger things have materialized before. Also, a mega church choir in Dallas, Texas has been opening church service with a “MAGA” song composed just for their church services.