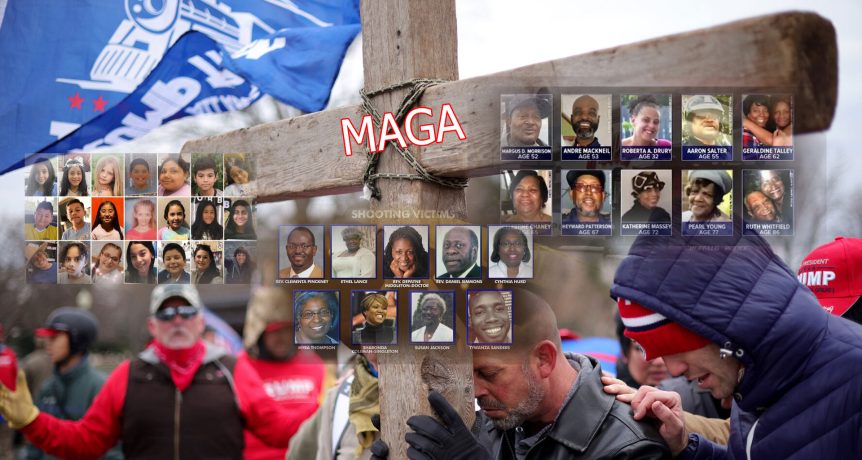 Any methods to cloak the rancid truth, by any means necessary, is where you will find all flavors of far-right Bible embellishers.

It is truly amazing to witness how white supremist ideology can reduce and redefine the Christian brand of which was modeled after a God incarnated human vessel named Jesus.

Although anyone can be religious about anything they so choose, Christianity is used daily to use for plausible deniability in efforts to avert responsibility for inhumane actions and blatant wrong doing. It’s similar to agreeing to paying fine without admission of guilt. This course of action takes place everyday in our judicial system for those that can afford such legalese hypocrisies.

People have always used the Bible as a tool to covers lies, steal and bring war to lands they don’t possess using passages out of context and actual scripture rewrites. Let’s be clear, Black people misuse the Bible also, but not to the extent people of European dissent practice and engage.

Black people have turned the other cheek so much, their cheek bone should be in some sort of evolutionary stage of provisional redefinition.

Whites are so afraid of the truth they have now labeled the horrific history of crimes against humanity in America as “Critical Race Theory”. There is nothing theoretical about what transpired for over four hundred years, because those acts against humanity actually happened just as the holocaust, war in Ukraine, the Buffalo melee, Uvalde school massacre and Charleston massacre of late.

A country that lives in a bastion of lies and corruption is doomed to destruction as the Bible gives poignant examples throughout its readings.

The Bible speaks of one Church, one God, while white supremacy clings to the old rugged cross as a symbol of intimidation also utilized by Caesar and his Roman military which mapped a clear path of moral indignation and doom for that regime.

The MAGA upholders are misaligned to “Christian” tenets and clearly give actual forbearance as being antithetical to messianic utterances. To put it where the the goats can get it, MAGA, white supremist and NAZIs are the spiritual manifestation of the fallen angel, Lucifer. No such thing as seeing and smelling smoke and there not be fire nearby or smelling that distinguishable odor of a skunk and that varmint not being in close proximity. In other words, it is what it is. Evil is evil which must be confronted and engaged with punitive certainty.

The far right Christians continue to taint and destroy the spirit of the Christian brand. This brand reconstruction is on the move carrying with it inevitable consequences and corrections of which the insurrectionists will have to answer so says the Bible they claim to believe.

This writer does not have to voice what those end game summations will entail. For those revelations, just read the book of Revelations and if you are one of those right-wing, abject Christians, read it and weep.