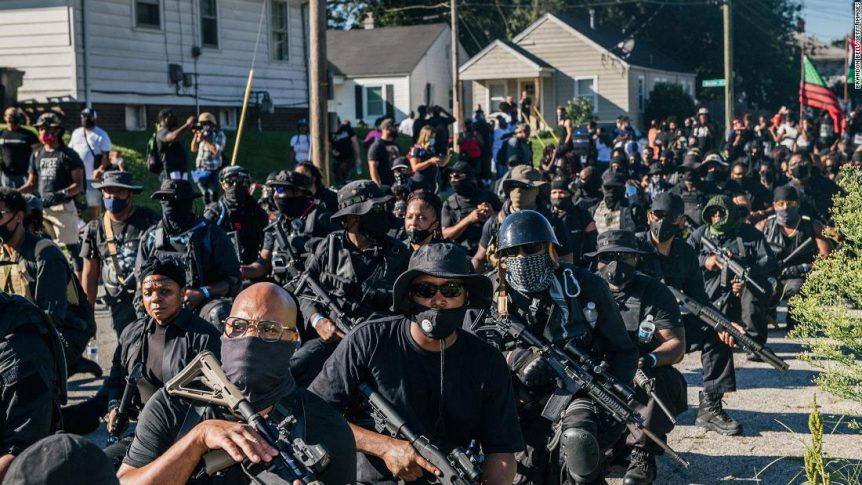 White media outlets such as CNN conveniently, strategically, or subjectively, pick and choose Black narratives and events. The recent March on Washington by Al Sharpton in August 2020, received cricket coverage from the major news outlets on the days of the events.

The Sunday morning (October 25, 2020) CNN headline reads; “An all-Black group is arming itself and demanding change. They are the NFAC”

When two loud bangs rang out on the streets of Lafayette, Louisiana, no one knew where the gunshots came from as protesters gathered to demand justice for another Black man killed by police.

Among the crowd was a group of armed Black men and women who call themselves the “Not F**king Around Coalition” or NFAC. The group did not run toward the gunshots or break formation. Instead, they kneeled on the ground amid the confusion, and then walked away after their leader shouted, “fall back! fall back!

“The all-Black, Atlanta-based group has grown in size out of frustration during a summer of protests against questionable policing and the deaths of countless Black people at the hands of police, said their founder John Fitzgerald Johnson.

Their presence has caused a stir in the cities they’ve visited and the group has drawn some criticism after people accidentally fired a weapon during two of their rallies, including the one in Lafayette.

Started in 2017, the group has marched in Stone Mountain, Georgia, calling for the removal of the nation’s largest confederate monument; Brunswick, Georgia, for Ahmaud Arbery; Louisville, Kentucky, demanding more transparency in the Breonna Taylor case; and most recently Lafayette, Louisiana, in the name of Trayford Pellerin.

Along with protesters rallying in multiple US cities, largely White groups have also showed up and asserted their Second Amendment right to bear arms. Unlike many of those groups, Johnson says his group emerged as a response to enduring racial inequality and police brutality.

Large Black armed-groups aren’t something often seen in the US. The most well-known was the Black Panther Party established in 1966 after the shooting of Matthew Johnson, a Black teenager killed by police. The group has since mostly disappeared.

NFAC already stands apart from other groups across the country, Thomas Mockaitis, a professor of history at DePaul University and author of “Violent Extremists: Understanding the Domestic and International Terrorist Threat,” told CNN.

“In one sense it (NFAC) echoes the Black Panthers but they are more heavily armed and more disciplined… So far, they’ve coordinated with police and avoided engaging with violence,” he said.
Johnson said the group is made up of “US citizens exercising our constitutional rights and the color of our skin shouldn’t make any difference.”

“Nobody says anything when other demographics pick up weapons, decide to arm themselves and confront the government over anything from wearing a mask to being cooped up in the house, but when certain demographics arm themselves all of a sudden people tend to act as if the Constitution doesn’t matter,” Johnson said.

This long news focus on this particular Black militia, NFAC carries a suspicious tenor to say the very least. The writers and crowd reporters here at InnerKwest will monitor where this media focus leads its viewers. We will update this contribution as it develops. Check back often. Peace.