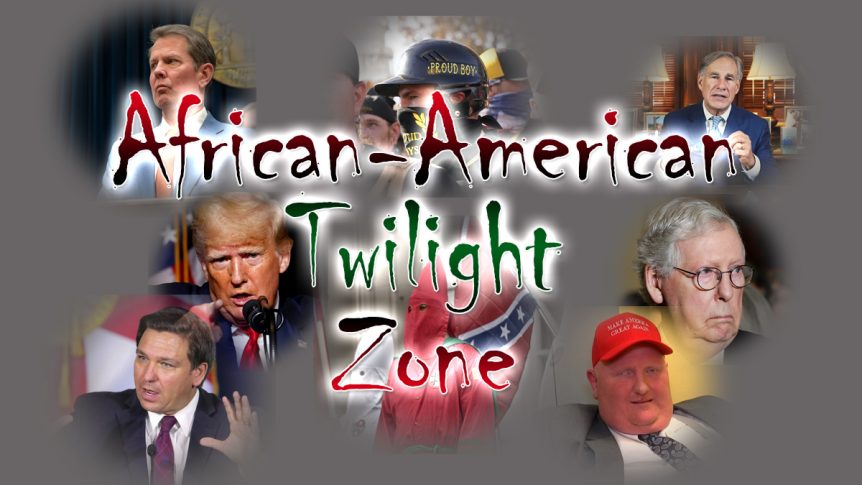 Recent events in politics and a wide array of state legislators have taken a u-turn for African-Americans pursuing the American dream.

States have successfully passed voter suppression laws that threaten the African-American vote at every level.

Every progressive law to protect Black quality of life and voter participation is being challenged in state houses across the country with impunity.

It is no longer hidden or considered shameful for whites to be openly racist. As a matter of fact this backward tendency is purposely rendered by right-wing media, right wing Christians, and right-wing politicians.

A social and political Twilight Zone for African-Americans

A social and political Twilight Zone for African-Americans has cast a cloudy and eerie turn to past transgressions Americans once thought eliminated from the American fabric.

The Wilmington insurrection and Tulsa massacre joined by other acts of white aggression on Black wealth generators has been reborn. A major example of this u-turn in 2021 was the January 6th insurrection. This key example of steadfast provocations from which MAGA patrons feed plus the right-wing appointed SCOTUS should rally all stripes of African-Americans to unify with great urgency.

Anti critical race theory is the new whipping horse Republicans have created. This latest false narrative has created a feeding frenzy for which bigoted whites can rally to the voting booths.

The capital insurrection was an echo from numerous confrontations seen across America in the recent Trump years. Whites have been signaled a go-ahead from Trump and a lackadaisical prosecutorial effort by the Biden DOJ to attack and test Black resiliency once again.