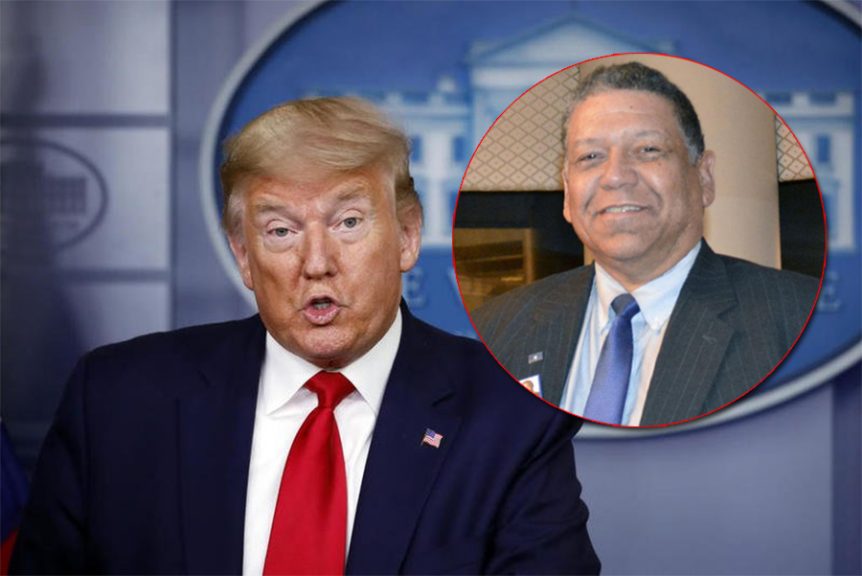 An Eat The Meat, Spit Out the Bones Series.

God forbid anyone especially Negroes, Blacks, Colored, African-Americans, or whichever is the latest trending, please don’t taint the Trump brand. His base is sensitive when it comes to non-white people vocally re-electing this president. They make threats of violence, won’t social distance, and other vast signatures of social maladjustment.

Robinson, who co-authored the book, “Coming Home: How Black Americans will Re-Elect Trump,” wrote in the statement that Black Americans to Re-elect the President has “never claimed to be part of the Trump campaign” and noted that its ads and website include a disclaimer saying as much.

The Robinson minstrel was once dubbed the “black Jesse Helms,” is behind a pair of inflammatory ads seeking to scare black voters from voting for Democrats.

Either way the drop falls, “Donald J. Trump for President, Inc. (the ‘Committee’) is filing this miscellaneous report consistent with 11 CFR 102.13 and 100.3(a)(3) to disavow the below mentioned committee which appears to be using Donald J. Trump’s name, image, likeness, or slogans in connection with soliciting contributions and conducting other activities,” the complaint filed by Donald J. Trump For President, Inc., begins. “This Committee is concerned about the likelihood of confusion among the public, which may be led to believe such activities are authorized by Mr. Trump or this Committee or that contributions to such unauthorized committees are being made to Mr. Trump’s campaign, when they are not. As such, the Committee wishes to place this disavowal notice on the public record that the following committee is not authorized by Mr. Trump.”

In his tweet that first broke the news, Markay tagged the Twitter handle of Vernon Robinson, the treasurer for Black Americans to Re-Elect the President, and wrote that the group “appears to do little beyond raise money and pay its own execs.”

While there was no immediate and apparent proof of that claim, the group’s website — complete with a URL of https://www.blackamericansmaga.org/ — does feature images of Trump and includes a link to its Soundcloud page that features an advertisement entitled, “Black Babies Matter,” that is accompanied by the imagery of a Confederate flag. The group also lists “Saving black babies from abortion and promoting crisis pregnancy centers” as one of “the policy initiatives of President Trump” that it promotes. Here is more to READ ON ROBINSON.

Whether you like Vernon Robinson or not, he must have been studying Trump, Mitch, Barr, and the other Trump cohorts. They are wheeling dealing, connivers, and now a black Republican of the same ilk is making his moves as illustrated by his contemporaries.

I don’t like or condone Vernon Robinson’s Benedict Arnold, cultural saboteur trait, but he took the lead from the Trump administration and the GOP. They are ruthless and to coin a phrase from Malcolm X, they will get their way ‘By Any Means Necessary’.