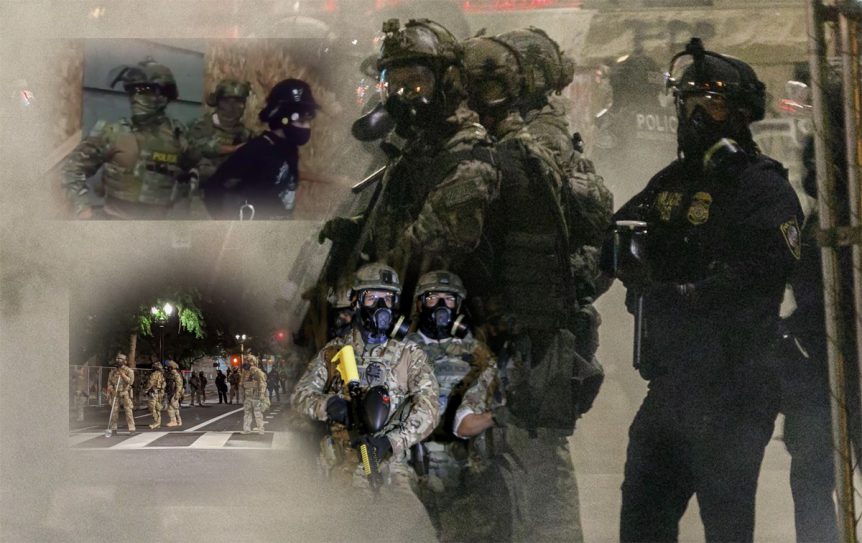 According to reports, peaceful protesters have been detained with no warning or explanations since at least 14 July.

Deep state gestapo tactics employed in Portland; Oregon, should be popping red flag warnings throughout America. This type of action is a precursor to fascism and authoritarian governance. If Trump gains a second term be prepared for anarchy. The local militia’s you knew nothing about because of apathy will surface in once tranquil neighborhoods awaiting Trump’s “Storm Troopers” and other nationalist sects.

Federal officers deployed teargas and fired less-lethal rounds into a crowd of protesters on Thursday, hours after the the head of the Department of Homeland Security visited the city and called the demonstrators “violent anarchists”.

Oregon Public Broadcasting reported that federal law enforcement officers had been “using unmarked vehicles to drive around downtown Portland and detain protesters” since at least 14 July.

“Personal accounts and multiple videos posted online show the officers driving up to people, detaining individuals with no explanation of why they are being arrested, and driving off,” it added.

Anti-racism protests have taken place for nearly two months in Portland, since the police killing of George Floyd in Minneapolis on 25 May.

During a visit to Portland earlier on Thursday, Chad Wolf, the acting homeland security secretary, said state and city authorities were to blame for not putting an end to the protests, angering local officials.

Wolf characterized the protests in a tweet, claiming: “The city of Portland has been under siege for 47 days straight by a violent mob while local political leaders refuse to restore order to protect their city. @DHSgov stands ready to assist to bring this violent activity to an end.”

In captions of pictures posted on Twitter, Wolf praised police dressed in military-style fatigues, and toured property that appeared undamaged apart from graffiti, such as “BLM” and “If not us, who? If not now, when?”

Since the Russians have a very comfortable relationship with the Trump administration, it would behoove us to investigate whether there are really American soldiers participating in this fiasco or Goose Stepping Russians testing the water on American soil for a forced “regime change”. Now-a-days anything is possible with the current executive branch.

Hopefully, we will not get to that point, but thus far many unthinkable events have shaken America at its core. So, I will ask again, “What you gonna do if they come for you?”