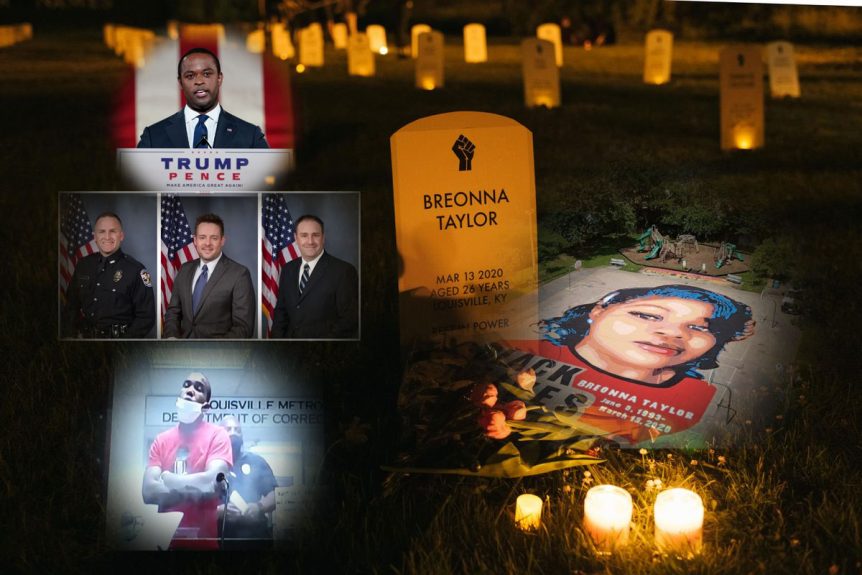 The Breonna Taylor murder cover-up gets more intriguing the longer it simmers. We are witnessing a law enforcement that grows violently more Anti-afrimetic and vehemently opposes the Black Lives Matter movement.

Every stall tactic and demeaning maneuver is being played out in the state and city in which Muhammad Ali was born, which is Louisville, Ky.

At the top of these state sanctioned miscarriages’ of justice is a young Black Republican State Attorney General, Daniel Jay Cameron. Also, keep in mind Mitch McConnell is the Senator from this bankrupt state.

There must be a distinction between Ms. Taylor’s ex-boyfriend and the present boyfriend of which was with her at the time of the no-knock intrusion murder.

Again for clarity, Breonna Taylor had a boyfriend prior to the present boyfriend she was engaged. The prior boyfriend’s name is Jamarcus Glover. The lead attorney representing Breonna Taylor‘s family says Louisville prosecutors offered Jamarcus Glover — her ex-boyfriend who is facing multiple drug-related charges — a plea deal that also listed Ms. Taylor.

Aguiar added, “This goes to show how desperate Tom Wine … is to justify the wrongful search of Breonna Taylor’s home, her killing and arrest of Kenneth Walker.”

In response to Aguiar’s damning Facebook post, Wine released a statement later on Monday, stating that the document “was a draft that was part of preindictment plea negotiations with Mr. Glover and his attorney.”

“Those drafts were never part of the court record and are not court documents,” Wine said. “[O]ut of respect for Ms. Taylor, I directed that Ms. Breonna Taylor’s name be removed. The final plea sheet provided to Mr. Glover’s counsel is attached and clearly does not include Ms. Taylor as a Co-Defendant.”

“Breonna Taylor was never a Co-Defendant in the Jamarcus Glover case,” Wine said.

The attorney for Kenneth “Kenny” Walker also told The Courier Journal on Tuesday that his review of the evidence indicates Walker didn’t fire the bullet that nearly severed Sgt. Jonathan Mattingly’s femoral artery.

Further, Breonna Taylor’s boyfriend has filed a lawsuit saying he is a victim of police misconduct and seeking immunity from prosecution for firing a single shot that allegedly wounded a Louisville officer the night police broke into Taylor’s apartment and killed her.

“We know police are firing wildly from various angles,” attorney Steve Romines said. “The timeline and evidence at the scene is more indicative of (police) actually shooting Mattingly than it is Kenny Walker.”

Walker, 28, is seeking unspecified monetary damages from the city and Louisville Metro Police Department for assault, battery, false arrest and imprisonment, malicious prosecution, abuse of process and negligence stemming from the night of the March 13 shooting, according to the civil complaint filed Tuesday in Jefferson County District Court.

In addition to all the misinformation, lying, and legal disruptions, the Attorney General of Kentucky is a 34 year Black Republican Daniel Jay Cameron, an avid Trump supporter. On top of all the hidden characters that surely add to the criminal complexities of the case is Mitch McConnell. McConnell represents Kentucky in the United States Senate.

This journey seeking justice for Breonna Taylor has turned into a hodge podge white supremacy, police brutality, and criminal miscarriages’ of justice.

This whole theater of criminal actions by police and the justice system illustrates the contempt carried out via two tiers of justice which tramples on the rights of Black people all the way to their demise.