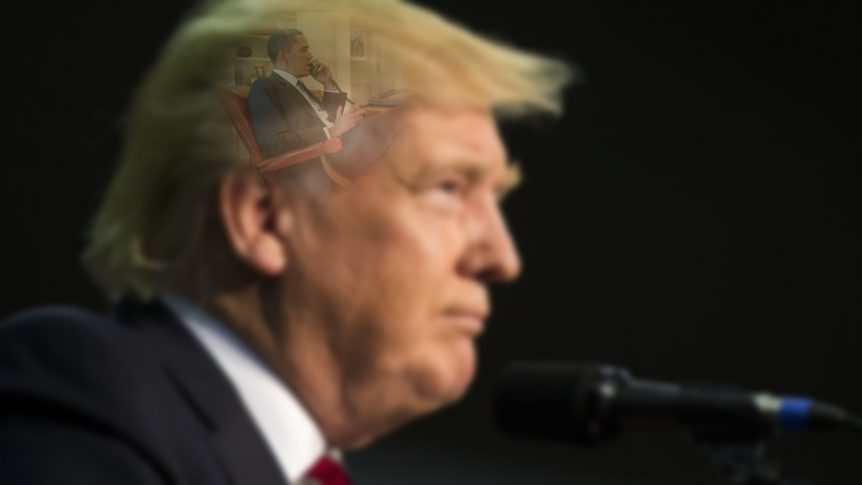 Trump should be mindful and cautious in his obsession with Obama. His obsession predates far before he was candidate for president. Trump has broken all ethical practices and boundaries of traditional parlance deemed analogous to the office of president.

From a distance a person could surmise Trump has a paradoxical fetish(?) for Obama. Now, can someone please help find a word that comes to mind when a man has a fetish for another man. In the private confines of Trump’s brain, “Obama has Permanent Cranial Residency in Trump’s Being”. “Hello…Is Anybody in There…..?” “Yep…Obama.”

Update 1:33 PM: Trump wants to push an Obamagate narrative, attempting to put Obama on some reality TV trial. Be forewarned. During the Clinton impeachment the opposition wanted to depose Vernon Jordan. Wrong move. When the GOP discovered Vernon Jordan may have held too many secrets of the GOP, they dropped that notion in milliseconds.

Trump’s pee-dripping cronies will not pursue an Obamoagate trial. There will be too many unknown variables that will come to bear for all to see. Just another one of his fetish fantasies.

During the slave era, the male master imposed all types of lewd and lascivious acts upon male slaves. Many of the male masters found themselves unable to have coutus with their wives after forcing homosexual acts (raping) on male slaves. Such situations forced the wife to accept her husband’s queer infidelities and would sleep with slaves also.

To satisfy his base Donald insinuates a master/slave narrative. This innuendo is constantly implied when he mentions Obama’s name. Trump orates what is inside his cranial residence. His mental and spiritual Obama entanglement has placed Donald in a paradoxical posture. His public Obama diatribes display that once he went black he hasn’t been able to psych himself back. He further attempts to make his “thing” about Obama appear racial as to stir up his political base, but a divergent perspective suspects he has Obama on his mind and in his soul. He has spent more time speaking about Obama than his newly found relationship with Jesus ushered in with the ravishing, red shoe wearing, Apostle Paula White.

The president acts out like a woman scorned. Trump has sniped at Obama’s character, dismantled Obama era policy, attempted to claim different types of hierarchy over Obama, and no-one can convince me he hasn’t privately went into a “nigga Obama” tyrant. And when I say privately, I mean with no black person around. His close staff including confidante Kellyanne Conway, probably cannot take a CIA–KGB–MI6 truth serum without revealing Trump’s freak obsession with Obama.

Jealousy and envy are attributes of when you have measured your sense of your self against your image to that of another person and arrived at a conclusion that was motivated by the biological signal of the affect of shame. And many times when shame is cloaked deep inside, a hate psychosis is the result.

If Donald J. Trump does not turn to a new chapter, his psychological profile attached to his presidential legacy will be captioned as one of the most racist presidents the United States of America has elected. He will share that attribute with:

Trump and McConnell have chosen to be ardent Obama antagonist. Whatever energizes their obvious caucasic motivations, those actions will continue to be met head-on by counter-forces that are resolute and crushingly capable of toppling destructive theaters of hate by any means necessary.