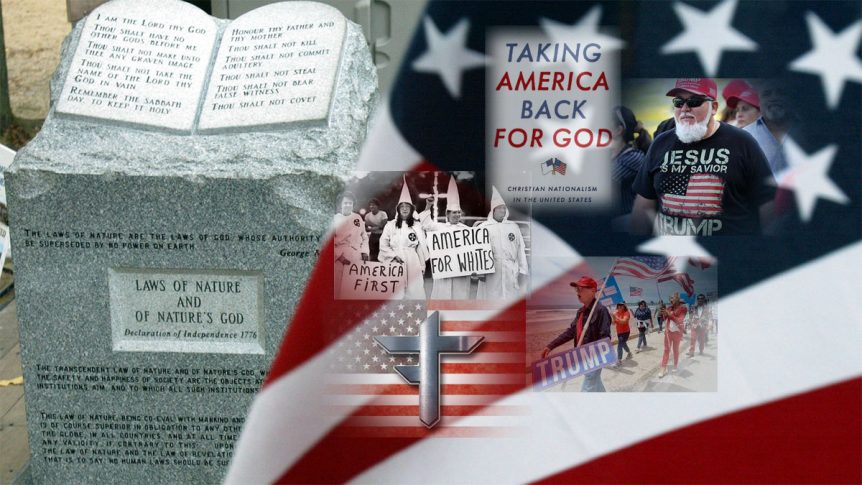 Racism’s perpetual occurrences and reaffirmation continues to be a thorny affliction, kneaded in the sour dough social construct of America. The Trump era is attempting to ratify racism through christian nationalist policy influence, while the GOP’s silent vote allow white supremacy out of the shadows and into daylight through a smog filtered sun.

The prerogative of the christian nationalist is pervasive and ushered in with the insistence of the Trump apparatus. Trump has never been a bible belt bandit until the christian nationalist decided he was more favorable to their divisive and misinterpretation of the bible. When Trump realized from whence his core support emanates, he pandered to them and accommodated them with the likes of Paula White, Gloria Copeland, and other private jet owning white fundamentalist. Trump also accentuated the environs with targeted black minstrels preachers grateful to be seen in The White House.

For 40 years now, the religious right has been a fixture in American politics and for all that time it has befuddled observers who continually misunderstand it, beginning with its support for Ronald Reagan, a divorced Hollywood actor, against Jimmy Carter. Reagan was the first US president to describe himself as a “born-again Christian”.

But Reagan – whose wife consulted an astrologer for guidance as first lady – was a virtual saint compared to Donald Trump, the most recent presidential beneficiary of their enthusiastic support, and someone that 81 percent of self-described white evangelical protestants rewarded with their votes.

The secret to making sense of them is simply stated in the title of Katherine Stewart’s new book: The Power Worshippers: Inside the Dangerous Rise of Religious Nationalism. It draws on more than a decade of first-hand experience and front-line reporting that began when her daughter’s public elementary school was targeted to house a fundamentalist Bible club.

Christian nationalists have betrayed what might have been their strongest suit. Christianity, as most people understand it, has something to do with loving our neighbors. But leaders of this movement have thrown in their lot with a bunch of selfish economic reactionaries who tell us we don’t owe anybody anything.

Christian Nationalism Moved from the Fringe to the White House

After Hurricane Harvey devastated the Texas coast in 2017, three affected churches sued FEMA, claiming the agency’s policy against providing relief funds to religious organizations was discriminatory. The matter was resolved when a pressure campaign by political figures associated with the religious right—including Texas Governor Greg Abbott and Attorney General Ken Paxton—resulted in the agency allowing direct funding of churches. By itself, the case may not seem very significant. But as journalist Katherine Stewart reports in The Power Worshippers: Inside the Dangerous Rise of the Religious Right, it arose from a disturbing context: the decades-old, well-organized, amply funded political effort to institute a conservative Christian theocracy in the United States.

As Stewart shows how the evangelical Christian church came to dominate politics, the alarm she raises can be neither ignored nor dismissed as conspiracy-mongering. She makes clear that Christian nationalists’ reach into current power structures—including Trump’s White House—demands urgency from those who would protect church-state separation. As November’s election looms, The Power Worshippers is a timely political exposé, indispensable reading for 2020 voters regardless of their religious beliefs. READ MORE

The KKK can be viewed as Christian Nationalist, as they maintain the same core beliefs echoing supremacy narratives demanding rein over non-Anglos’ by any means necessary. With recent protests in America going into a third week, an overwhelming silence can’t be ignored from most black churches and white churches. For most black churches silence is golden until fruits of the labor and courage from those on the front line start to show signs of progress. Then and only then will pastors find an entry to add their low decibel voices. As the Stevie Wonder song says “Where were you when I needed you last summer”.