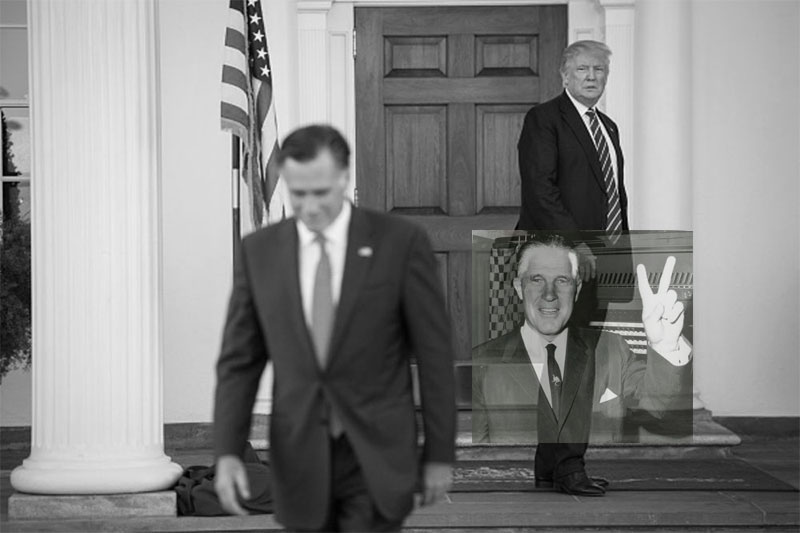 Mitt Romney had the courage to vote his conscience by voting to impeach Donald J Trump. Trump had already issued a warning to his pee-dripping senators they better not vote against him or they will be politically scorched and burned by his political apparatus.

Mitt has the blood of his father George Wilcken Romney. He was an American businessman and Republican Party politician. He was chairman and president of American Motors Corporation from 1954 to 1962, the 43rd Governor of Michigan from 1963 to 1969. George Romney had a reputation of being fearless.

Not only is Mitt a Mormon, he is also a multi-millionaire. He is part of Bain Capital, an American private investment firm based in Boston. Those facts alone make Mitt immune to Trump’s doom day threats.

It now appears Romney could play some key roles in some of the upcoming Trump-a-cades against Biden and his son Hunter.

Now, he could throw another wrench in President Trump’s and the GOP’s efforts to dig up dirt on the Bidens — this one with more practical impact.

“That will be a major issue in the campaign,” Trump said. “I will bring that up all the time, because I don’t see any way out for them. I don’t see how they can answer those questions. I hope they can. I’d actually prefer it that they can’t.

Romney indicated that he is skeptical about the need for the Senate Homeland Security Committee to issue a subpoena related to Hunter Biden’s work for Burisma Holdings, the Ukrainian energy company.

Romney also told reporters the effort “appears political” and said, “I think people are tired of these kind of political investigations.”

Trump noted that Democrats hadn’t used the issue against Biden and said that “wouldn’t happen with the Republicans, I can tell you.”

“That will be a major issue in the campaign,” Trump said. “I will bring that up all the time, because I don’t see any way out for them. I don’t see how they can answer those questions. I hope they can. I’d actually prefer it that they can’t.”

Will this be the beginning of a Trump Lego House of Cards? Probably not, but it is a shot over the bow to the GOP and to their fearless mob boss, there is evidence of a free radical in the corrupt Republican body.

Damage to cells caused by free radicals, especially the damage to DNA, may play a role in the development of cancer. There is no such thing as a good cancer, but in the case of the Republican leadership a political malignancy by way of a free radical may lead to a road of saneness and moral revival.

Either way the drop falls, Mitt Romney has showed his party constituents he is not about to bow down to a dictator wannabe. Some might say like father, like son.
Mitt Romney is the free radical of the GOP anatomy.