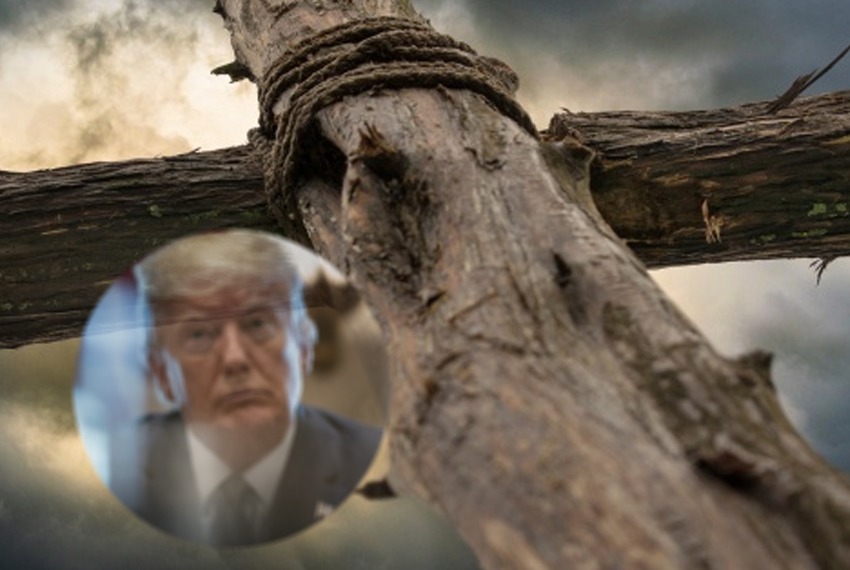 Tales from the White House revealed President Donald J. Trump is advocating to open the country back up for business by Easter (April 12th). Is this an actuary think tank projection, wishful thinking, or Christian mockery?

For Trump to designate Easter as an economic jump-start point should send Christian communities quaking in their boots. Most followers of Jesus Christ respect and understand the significance of the cross while referencing its relevance to the Easter observance. The cross is one of the most primal, severe punishments to be sentenced and witness. If there is such a notion as a less gruesome crucifixion, the Roman punishment was less disfiguring. On the other hand the Zulu crucifixion could be considered the most disturbing. Why? Because this specific punishment literally rips the torso from the lower extremities.

Trump’s christian implication is an appeal to his saving-grace political base, designed to trigger a plausible deniability back peddle if needed. A selective idiom would be rendered should a reverse in direction warrant a response to an extreme backlash from public opinion.

One of the Christian mandates is not to judge others which Trump, Mitch McConnell, Lindsey Graham, and other fellow legislators ignore with deliberate indifference.

“Do not judge, or you too will be judged. For in the same way you judge others, you will be judged, and with the measure you use, it will be measured to you.

Part of Trump’s rhetorical strategies is to judge others, make mockery, and engage in voluminous gaslighting.

Trump has displayed little to no regard for most basic tenants of Christianity. The writer has little regard for mature people with Reverend preceding their names, that allow him by proxy, to create breadcrumbs which lends their pastoral license as his moral ratification cast. Those persons should take heed by washing their hands of his policy contaminants with the same vigor as prescribed to scour Coronavirus (COVID-19) off hands.

Trump remains a deceiver, infidel, heretic, and a grave danger to the United States Of America on multiple levels. Trump and his signatory are antithetical to the teachings’ of Jesus Christ. Jesus unites, while Trump and his glory team, with great regularity, promote gaping division.

According to the Bible, the book of Matthew 7:1-5 reads: “Do not judge, or you too will be judged.  For in the same way you judge others, you will be judged, and with the measure you use, it will be measured to you”. ……

Call me what you will and say what you will, Trump makes reckless judgments on an ongoing basis that impact lives domestic and international.

Two destinations we frequent when traveling to Italy is Rome and Venice. My initial visit to Rome was an eye opener. After settling in our accommodations I contacted our prearranged tour guide. We visited the Vatican for an 8 hour tour and the next day we were on foot in Rome.

Our guide was actually a Roman. She made note, not all Italians residing in Rome are Roman. To be legally recognized as a Roman citizen you must be an heir from 7 straight generational lineage of Roman bloodline. One other notable pointed out was: In the days of the Roman Empire, the streets had posted street signs of the cross along the side. The distributed signs displaying the cross was a reminder that punishment lay ahead if Roman law was not respected or broken.

Again, for some questionable reason, Trump has designated Easter as the day to resurrect the economy. Maybe he is appealing to his alt-right religious factions.

We will see how this latest Trumpisode plays out in the Trump theater of religion:
A Trump Easter By The Old Rugged Cross.

[…] blind mice are a sampling of the sentiments traipsing in and around congregations that elected Trump. Not to say there aren’t other religious leader profiles following suit, but these specific […]