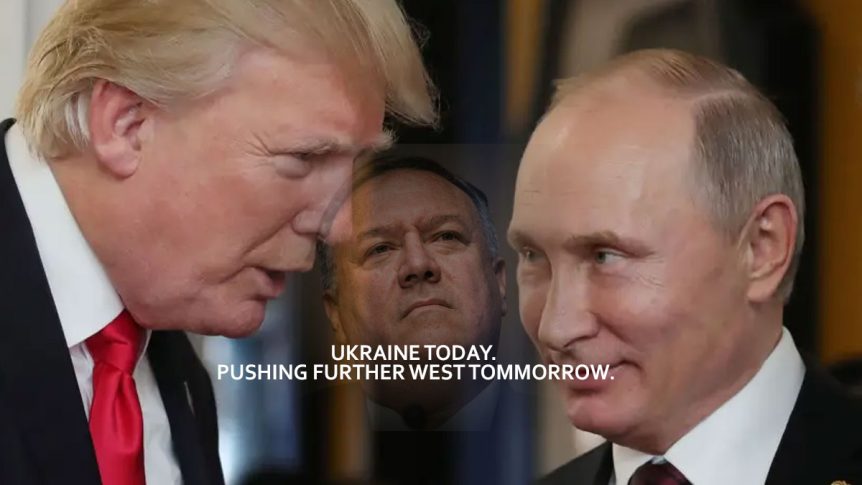 The TrumPutin effect of lawlessness throughout government is evident with its impact being felt all the way into the American judiciary fabric. As of late one of the most aggressive criminal investigations against Donald Trump appears to be running into the sand after the two leading prosecutors in the Manhattan district attorney’s office investigating the former president’s finances resigned. The day before they resign, Putin invades Ukraine and is praised by Trump and Micheal Pompeo (former secretary of state) for being savvy.

Many are starting to argue that Trump clamors to Putin because his thinking channels Adolf Hitler which Trump has openly said kind words and former United States SecState, Micheal Pompeo also has kind words about the invasion leader (Putin) into Ukraine, which giving Pompeo’s Italian heritage, courts the mindset of Benito Mussolini, an Italian political leader who became the fascist dictator of Italy .

With all the convergent right-wing actions prevalent in America, the sticks are lining up for either totalitarianism or American fascism. Take your pick.

Trump and his political cohorts exercise their white privilege’s by skirting accountability at all levels of government and ratified by appointed judicial cronies.

Democracy in America is on the edge of being dismantled because of local gerrymandering, local election board and school board manipulation, coupled by a blind eye in the local court system.

Too many judges are extremely biased and openly prejudice at every realm of court actions in America.

The strategy of converging on local governments, especially school boards has proven effective in controlling the vote and muting the history of America.

“Critical Race Theory” has become a major talking-point-distraction for the GOP to create white backlash. Getting the right-wing and their constituents to rally behind banning books and anything that states the historical facts about how America got its super power status is a formula for catastrophic results.

The fragile psyche of white America do not want the truth in the eyes and ears of their children. Every possible effort is being expended to quell the vote of Black people in America. Truth is no longer a virtue. Truth is opposed as an abomination in many realms of white society including their religious organizations.

African Americans had better see and understand the writing on the wall. The sticks are lining up when looking ahead to the 2022/2024 elections.

If Black people think for one moment that a government other than an experiment in Democracy will bode them well, they will have a very rude awakening. When the sounds of artillery shells start shaking our communities it will be too late for much other than again to succumb to their imposed alternatives.

Black people in America know what must be done which is to fight back through their local elections on the school boards and local governments. Or else.