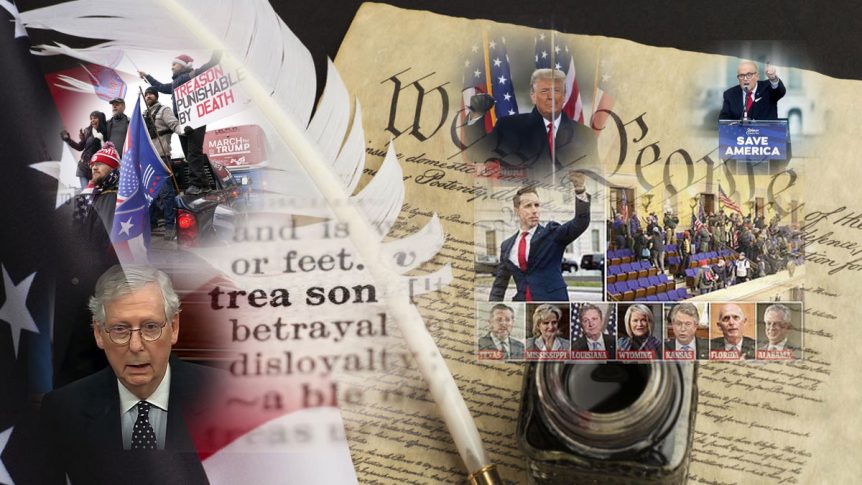 Federal laws apply to people living in the United States and its territories. Congress creates and passes bills. The president then may sign those bills into law. Federal courts may review the laws to see if they agree with the Constitution.

Legal definitions outlining treason and espionage are well established. There is a shift in the wind laying the ground work to re-Define scrutiny levels (bars) in the era of “Insurrection January 2021” legal challenges. The language describing the almost debilitating action taken against the pillars of democracy in modern day America is taking shape to lessen the consequences for the capital offenses committed by the insurrection anarchist.

If another country would have experienced the trauma the United States of America endured January 6th, 2021, America would be sending extraordinary military and financial resources to aid in civil restoration and guard democracy where ever the theater of insurrection culminated.

The System at Work

The system is at work developing multi faceted spin language to de-emphasis the capital felonies committed on Capital Hill. Seeded phrases such as assault, breaking and entering capital grounds, simply following the crowd admissions, accessories to murder have started to fill the ears of the American public and lawmakers.

Republican members once strong advocates for Trump are now about-face voicing disingenuous gestures such as: ” Turn down the heated language” and other cloaked messages to Democrats whom they have not co-operated for the last five years. Republicans such as Cruz, Hawley, McConnell, Graham, and more continue to reframe their menacing opposition to the Biden/Harris electorate win. READ MORE

The System at Work

A scorned George Washington, laid back Alexander Hamilton, and host of other slave owning Framers of the Constitution, insured there were loopholes for defined citizens to skirt the republic’s legal framework when presented spurious legal arguments.

How the system will respond to challenge Biden and the first ever woman vice-president, which happens to be Black, will be challenging for the system and office holders.

For the time being; “stop, look, and listen, before you cross the street. Use your eyes, then you ears, then CALL THE FBI about any suspicious threats or behavior at: https://www.fbi.gov/tips.”