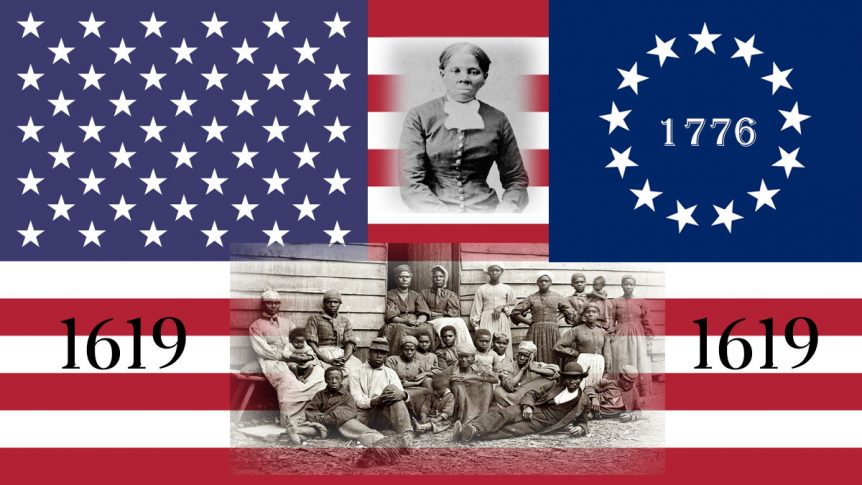 Any ill-conceived notions that excites Trump’s under-educated, racist voting block will be employed while attempting to derail the upcoming 2020 elections.

Trump took aim at the 1619 Project, a series of essays in the New York Times re-examining America’s legacy of slavery which has become a common foil for right-wing politicians, calling it “ideological poison” that will “dissolve the civic bonds” of America.

1776 American history will reveal the colonies insatiable appetite for free labor which also financed the war with Britain and all preceding wars that help establish the colonies as a force.

At that time George Washington had been a disgruntled British soldier. He eventually became a general in the Continental Army and a ardent slave owner. Washington played a central role before and during the American Revolution. His disdain for the British military had begun when he was passed over for promotion into the Regular Army. Opposed to taxes imposed by the British Parliament on the Colonies without proper representation, he and other colonists were also angered by the Royal Proclamation of 1763 which banned American settlement west of the Allegheny Mountains and protected the British fur trade.

The free, forced labor of the slave financed the proceeding wars that lay ahead. The slave industrial complex served as financial securities for the colonies in their offensive and defensive war efforts. Therefore, if slavery would not have been part of the federated foundation, the British would have toppled any war effort the colonies would have been engaged.

Executive orders to take America backwards to a modern-day benign realization of America’s past is a toxic effort to deny the horrific, inhumane actions taken by the white colonialist establishment of 1776.

The emphasis on denigrating the long-term effects slavery cast on slave descendants is a statement revealing many Americans feel no moral outrage or humanitarian conscientiousness. Conjuring up a false narrative curriculum, with unequivocal comparisons, will only plummet the country into more generational state of white nationalist retardation.

InnerKwest™ will continue to be a clarion sentinel projecting “effort to impact”. We will engage with robust whomever, whatever, and wherever challengers to African-American demands for justice, truth, and parity emerges.