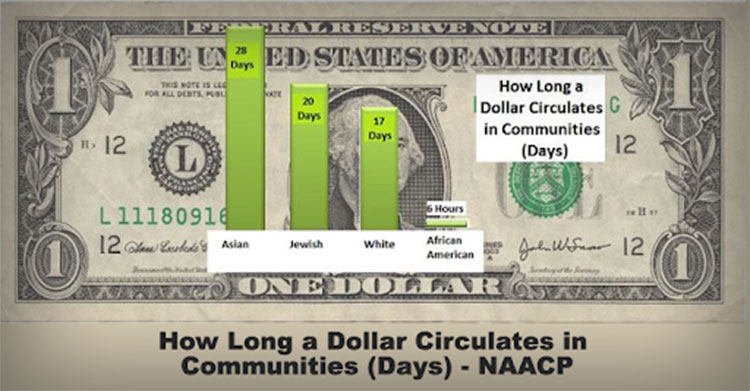 Coronovirus pandemic further amplifies the necessity for African-American communities to circulate and re-circulate the dollar in its community. All of the enormous panic spending African-Americans have contributed went straight to other communities.

Previous administrations that after some time in office, must claim the state of affairs as their own. Case and point: Obama inherited several wars when he was elected. After time in office, although he may not had been in office when the war started, it is now his war because he has accrued time in office and the war theaters is now his to address.

The same goes for the Trump administration. There is only so much blaming Obama he can do. He has time in office to acclimate to the position and all the responsibilities that need his deliberation.

African-Americans do have a complex American story unlike any immigrants that have come since the republics establishment. And there is an unpaid debt owed for that complexity brought to bare on the community and its descendant’s progeny. In the interim African-Americans must move forward with a vengeance.

As we know, everyone cannot be in the entertainment industry, but there are endless other vocations and career paths that make a handsome living. As a people more mindsets toward entrepreneurship must be cultivated and the mentality must also embedded to seek African-American business first before spending. Non-African-American cultures have a mindset cast in its purchasing habits that demands patronage within its respective communities. Too man blacks have no communal conscience when purchasing which in turn makes it difficult for black business to grow.

InnerKwest will hammer this message on a constant basis. It’s a matter of survival that the African-American be more engaged with this message of loving ones self economically through deliberate patronage within the community.

When bad actors in the community are revealed we must weed them out, but falsely lumping them with the rest of the community is a backwards mentality.

The longer this pandemic last, the more the social class hierarchy will start to boldly flex on greedy and separatist agendas. Watchful eyes will also need to monitor medical practices of inclusion and exclusion.
Black and Hispanic workers are less likely to be able to work from home, a new report says. READ MORE

The chairman of the Senate Intelligence Committee warned a small group of well-connected constituents three weeks ago to prepare for dire economic and societal effects of the coronavirus, according to a secret recording obtained by NPR. READ MORE

He’s said it’s “not racist at all, no, not at all” and that he wants “to be accurate” and that the virus “comes from China.”

The Trump political apparatus went silent briefly when the reality of COVID-19 hit home. Previously, Fox News personalities misinformed America and Trump’s base stating the virus was a liberal party hoax to hurt the Trump re-election effort. Since that time they have admitted to the severity of the Coronovirus, thus a pandemic. READ MORE

Now that the shock of the stark pandemic has worn off to a degree, the Trump team has began a racist narrative calling the Coronovirus the “Chinese virus”. Trump and his team was called out on that assertion. When called out, He’s said it’s “not racist at all, no, not at all” and that he wants “to be accurate” and that the virus “comes from China.” His fellow trolls including: Tucker Carlson, Sean Hannity, John Cornyn, and Kellyanne Conway all campaigning the same rhetoric in unison.

Further more, when is the last time a news media story was published about the immigrant children and the effect of coronovirus pandemic on that situation?