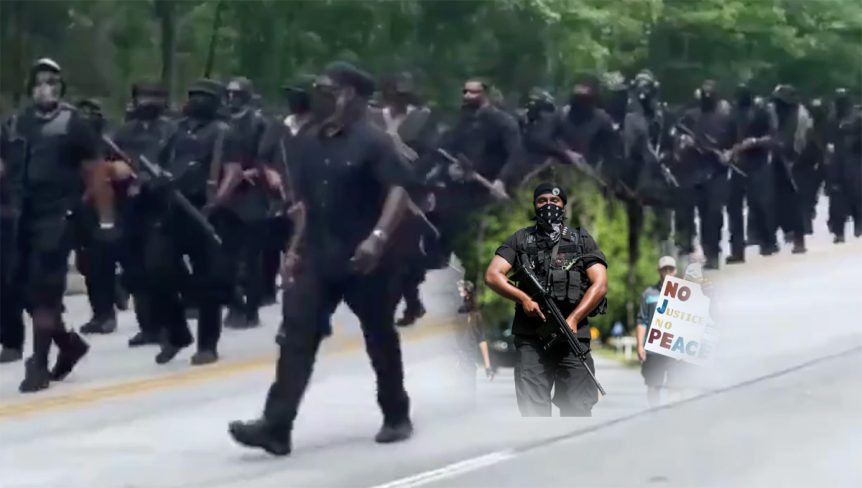 Heavily armed protesters, all of whom were Black, marched through Georgia’s Stone Mountain Park on Independence Day, challenging white nationalist groups in the area to either come out and fight or join them in demonstrating against the government.

Stone Mountain State Park officials said the Black militia group was peaceful, orderly and escorted by police Saturday as they called for the removal of the country’s largest Confederate monument near Atlanta. Videos posted to social media show the group, the “Not F**king Around Coalition” (NFAC), meeting at the massive nine-story quartz sculpting that depicts Confederate president Jefferson Davis and Southern generals Robert E. Lee and Stonewall Jackson.

Many of the protesters carried rifles, including military-type weapons, and some wore ammunition belts slung over their shoulders. Although African Americans appeared to account for the vast majority of the marchers, protesters of various races, men and women alike, were among the group.

One video clip showed a leader of the demonstrators, who was not identified, shouting into a loudspeaker in a challenge to white supremacists who historically have used Stone Mountain as a rallying spot of their own.

The NFAC head explained why several videos show the militia members alongside demonstrators earlier in the day before heading to Stone Mountain. Grand Master Jay told Newsweek the sister of Rashard Brooks, who was killed outside an Atlanta Wendy’s by police last month, requested the NFAC militia provide her with a security escort to a downtown rally which began at the site of her brother’s death.

The coalition of Black Panthers and largely Black militia met at the monument, which is historically tied to the birth of the Ku Klux Klan and has more recently been the site of white nationalist rallies. Leaders of the heavily armed marching protesters frequently halted the protest to challenge local white supremacists and far-right Second Amendment advocates to “stop hiding.”

“I don’t see no white militia, the boogie [boogaloo] boys, the three percenters and all the rest of these scared-ass rednecks. We here, where the f**k you at? We’re in your house,” one protester said into a PA system during the Stone Mountain Park march.

“We will not allow the murder of another black person, whether it be white people or black people,” said self-proclaimed founder of the NFAC, who identifies himself as “The Official Grand Master Jay” on social media pages. “I am not f**king around.”