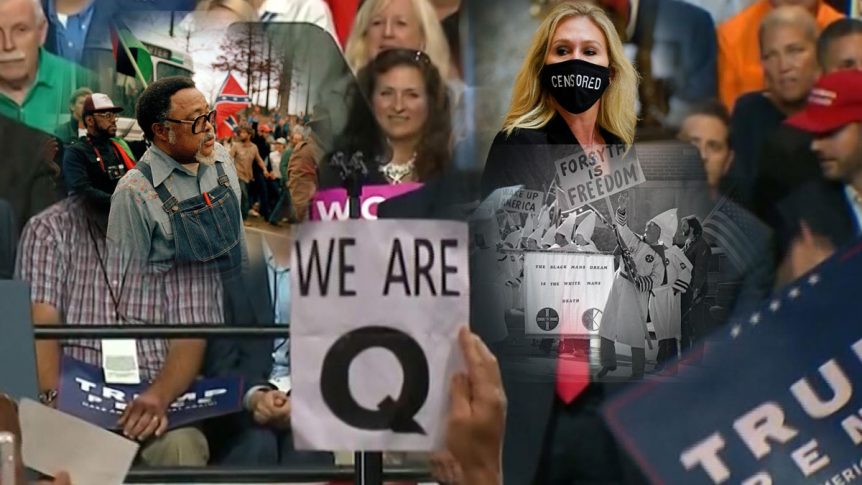 QAnon disciple Majorie Taylor Green tried to make amends with her fellow Republicans for her contributions to the QAnon conspiracy theories, but her false appearance of contrition showed through.

Greene represent the Georgia’s 14th congressional district, but has roots in Forsyth County, Georgia. The election of Green has ushered in an era replacing public servitude with Republican conspiracist discipleship.

The ‘Racial Cleansing’ That Drove 1,100 Black Residents Out Of Forsyth County, Ga.

In 1912, white mobs set fire to black churches and black-owned businesses. Eventually the entire black population of Forsyth County was driven out. Majorie Taylor Green is the product of one of the most racist places in America. READ MORE

Marjorie Taylor Greene said she regretted some “words of the past” but did not apologize for previously supporting violence against Democrats, among other recent controversies and conspiracies, as she addressed the House on Thursday.

The speech came before a vote on whether to strip her of her committee assignments for recent revelations, which included verbally abusing Parkland School shooting survivor David Hogg, and racist attacks against Democratic members of Congress. READ MORE

Major media is at fault giving stage to the massive spreading of this delusional person by headlining her trolls on all major platforms. She was not the favorite candidate initially, but she embraced the QAnon narrative along with other Trump neophytes, allowing her narrative to go viral. She used the Trump model of luring media’s insatiable appetite for scandal. People gravitated to her conspiracist pleadings and her war chest started to grow exponentially. Green now has a multi-million dollar campaign fund which assures she will be a contender, especially with the 74M that voted for Trump.

GOP members have more than entertained the temptation of departing traditional party lines. They have been blindfolded by a spirit of greed, racism, and conspiracy theorist. That symbolic beast has revealed itself in the form of 74M working class Americans in almost a portrayal of discipleship.

The country is divided on moral and constitutional grounds. To further intoxicate the electorate with toxic rhetoric Republican such as Majorie Taylor Green, Ex-President Donald Trump, Mitch McConnell, Kevin McCarthy, Lindsay Graham, and a host of down stream political opportunist continue to feed the beast of misinformation.

Many African Americans feel the country is at an inflection point with the election of the Biden/Harris presidency. African Americans, with emphasis of African American women, have demonstrated strength and unwavering focus challenging the Jim Crow status quo caucus manifested at every level of American democracy.

As the QAnon theater ratchets misinformation through conduits such as Majorie Taylor Green, Blacks must continue to find the ties that bind and as a people be bound to form as a formidable power broker.

Check Back for Updates