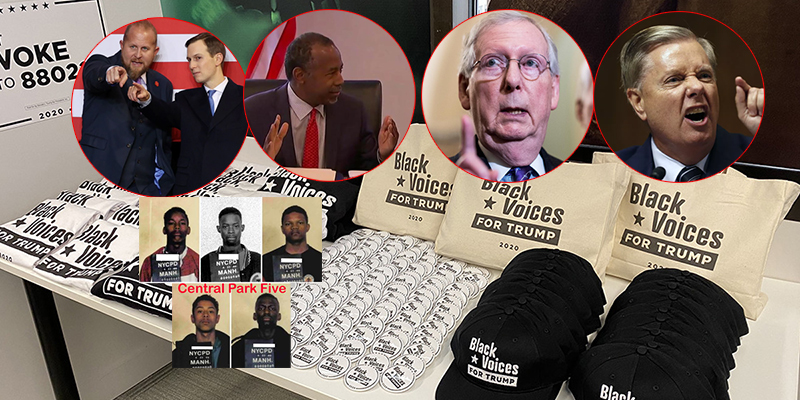 Black voter importance has been elevated to a new level of confession. The Trump campaign is increasing its presence in swing states targeting African-American voters.

As part of an ongoing effort to increase Trump’s share of the black vote this fall, the president’s reelection campaign unveiled plans on Wednesday to open a series of “community centers” in empty retail spaces across the U.S. where paid staffers and volunteers will spend the next several months courting black voters with literature, celebrity meet-and-greets and “woke”-branded attire.

Black voters please be woke to the fact Trumps administrative interns and staff contain little to no African-Americans. Besides Ben Carson and some black preachers, there are no other African-Americans near the president on a daily basis. Why would any voting block vote for an administration that does not reflect the voter’s cultural whatsoever?

Brad Parscale Trump’s campaign manager is reviewing past and present actuary data that shows every historical trait and trends of the black voter.

Black people as a group are very fragmented. We don’t support each other. Many African-Americans want to assimilate to the larger culture. The black on black murder rate is alarming throughout America, thus many could say blacks have a self-hate element from which we still struggle.

Unlike our Jewish counter-parts, blacks have a history of being market driven, rather than be market drivers. Until we become less critical of each other and embrace entrepreneurship in larger numbers, we will always be the target of foreign agendas.

The central park five. Trump still refuses to admit he was wrong about the Central Park 5. More than a decade after the exoneration of five black and Latino teens accused of raping a woman in Central Park, President Donald Trump indicated on Tuesday that he still doesn’t accept their innocence. Nor does he think he owes them an apology for publicly calling for their executions. READ MORE

Stephen Miller: why is Trump’s white nationalist aide untouchable?
Lawmakers and civil rights groups have called for the ‘quiet extremist’ to step down, but the White House stands by him. Despite weeks of fallout over an email scandal that revealed the senior White House adviser Stephen Miller’s white nationalist views, Donald Trump’s administration has made clear it is standing by its man. READ MORE

The Psychology of Trump’s Preoccupation with Obama.
Obama is antithetical to Trump. So long as he exists, Trump is threatened.
Central to Trump’s presidency is the effort to erase Obama’s legacy—his policies, his social agenda, and, more intriguingly, his very persona. This observation is neither new nor original. After all, Trump’s run on the Republican party began with his advocacy of birtherism, an attempt to quite literally delegitimize Obama. (As early as 2012, even before he formally entered politics, Trump also questioned Obama’s college transcripts, while later going to great lengths to hide is own). READ MORE

Trump pitches black voters: ‘What the hell do you have to lose?’

It is apparent the Trump campaign has calculated that enough black voters can be swayed to vote against their best interest. Because many of Trump’s core voters harbor extremely negative views of black people, voting for Trump is the same as voting for the KKK and similar spirited voters. Please boycott any and all Trump store fronts targeting the black vote. Contrary to what Trump said to the African-American voter when he was running for president in 2016, Trump pitches black voters:
‘What the hell do you have to lose?’

It Now Appears Blacks Have a Lot to Lose.