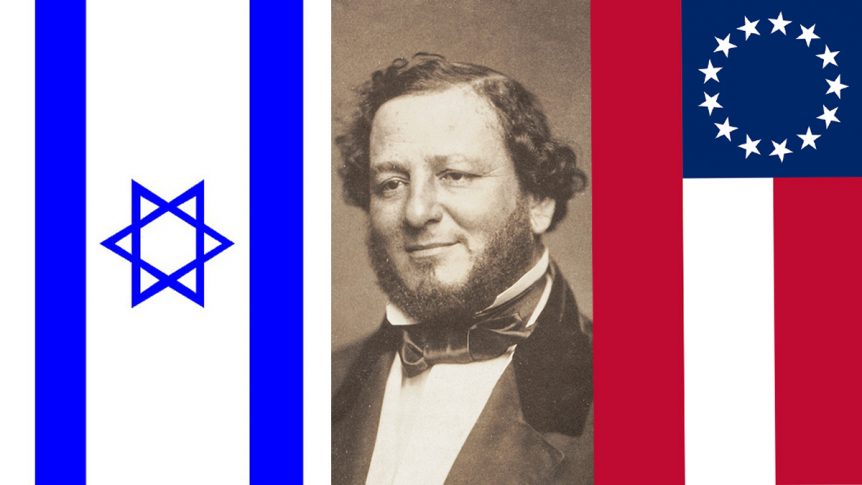 The Jewish second-in-command of the Southern Confederacy during the Civil War was once a United States senator.

Judah Philip Benjamin was born August 6, 1811 on the island of St. Croix in the Danish West Indies (the present-day Virgin Islands) to Jewish parents. At the time of his birth, Benjamin’s family was in transit from England to America. However, due to the War of 1812, the family was forced to settle in the West Indies until the war ended. They finally arrived in America in 1814, settling in Charleston, South Carolina.

Judah Philip Benjamin was Jewish and before he could even be seated as a senator, Benjamin was also offered a seat on the Supreme Court by outgoing President Fillmore. Benjamin declined and was sworn into the Senate on March 4, 1853, becoming the second Jewish senator (after David Levy Yulee of Florida, in 1845).

Benjamin was an exemplary student. At the age of 14, he entered Yale University. Two years later he was expelled (no record exists as to the reason) and eventually, Benjamin moved to New Orleans.

Benjamin apprenticed at a law firm and began to study for the bar–a complicated course of action because, to become a lawyer in Louisiana, the state’s use of the Napoleonic Code required fluency in both English and French. In order to fulfill this requirement, Benjamin took a job teaching English to the daughter of a prominent Creole family, Natalie St. Martin, so that he could learn French.

The tutoring sessions worked well and provided unintended benefits–on February 12, 1833, the 21-year-old Benjamin and the 16-year-old Natalie were married. As a condition of marriage, Benjamin agreed that the couple’s children would be raised in the Catholic faith. That same year, Benjamin was admitted into the Louisiana bar.

“An Egyptian in Israelite Clothing”

Before he could even be seated as a senator, Benjamin was also offered a seat on the Supreme Court by outgoing President Fillmore. Benjamin declined and was sworn into the Senate on March 4, 1853, becoming the second Jewish senator (after David Levy Yulee of Florida, in 1845).

Benjamin was offered an appointment to the Supreme Court once more, in 1854, by President Tyler. Again, Benjamin declined. In the Senate, Benjamin gained a reputation as a skilled tactician and orator, yet his Jewish background and service for the slave-holding South provided points for attack. An abolitionist senator referred to him as “an Egyptian in Israelite clothing.”

In March of 1861, Benjamin was appointed Attorney General by Confederate President Jefferson Davis, with whom Benjamin had served in the Senate. Davis often referred to Benjamin as “the brains of the Confederacy.” His appointment made Benjamin the first Jew to ever serve in an American cabinet. That same year, Davis requested that he accept the position of Secretary of War.

After public outcry over Confederate failings on the battlefield, in particular when reinforcements never arrived at the battle of Roanoke Island, Benjamin resigned as Secretary of War and was promptly appointed Secretary of State. Benjamin served in that position for the remainder of the war, often working at Davis’ side for up to 12 hours a day.

On February 9, 1865, two months before the Confederate armies surrendered, Benjamin gave the most controversial speech of his political career, an impassioned plea for the Confederacy to arm their slaves and enlist them as Confederate soldiers. In Richmond, before an audience of 10,000, Benjamin asserted: “Let us say to every Negro who wishes to go into the ranks on condition of being made free–‘Go and fight; you are free.’ If we impress them, they will go against us. We know that everyone who could fight for his freedom has had no chance.” READ MORE