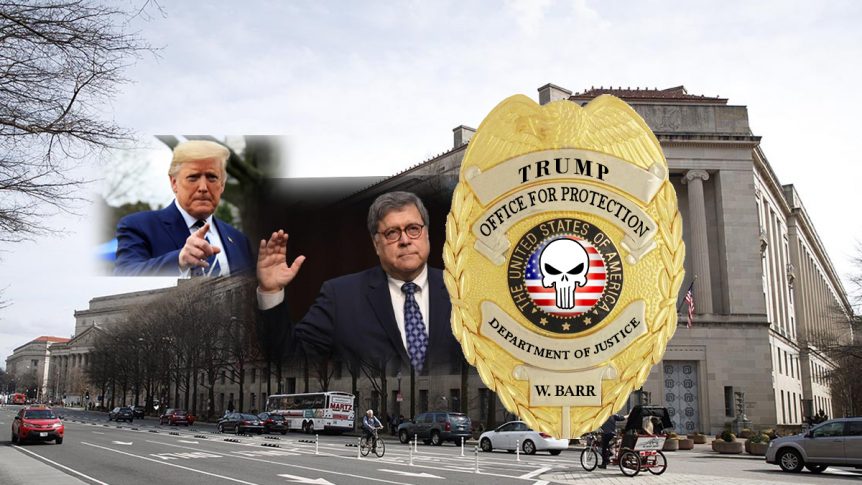 William Barr has succinctly converted the DOJ to the OFP also referred to as the acting Office For Protection, of Trump.

Attorney General Barr’s intervention for Trump allies Michael Flynn and Roger Stone was ‘egregious,’ says prosecutor who quit DOJ. Any and all things either gray areas or blatant disregard for the law, Trump has insisted the DOJ cover his ass. William Barr creates moving screens and legalistic bidets from which Trump can appear cleansed with Barr clinching a stained drying towel.

A former federal prosecutor who quit the Justice Department in protest over its handling of Republican operative Roger Stone’s criminal case in a scathing article Monday accused the department of a “betrayal of the rule of law” and Attorney General William Barr of “egregious” conduct by intervening in that case and the one of Michael Flynn, President Donald Trump’s first national security advisor.

The ex-prosecutor, Jonathan Kravis, also warned that the Justice Department’s intervention in the Stone and Flynn cases, “to protect an ally of the president … betrays this principle” of a “commitment to equal justice under the law.”

“I am convinced that the department’s conduct in the Stone and Flynn cases will do lasting damage to the institution,” Kravis wrote in an op-ed in The Washington Post. READ MORE

Does the justice department work for the Trump campaign now? Looks like it from where I stand.

The US attorney general seems determined to turn the DoJ into a fully fledged arm of the Trump re-election team.
It was enough that last week, the US Department of Justice did something completely unheard of: it moved to dismiss the guilty plea of a cabinet level officer, former national security adviser Michael Flynn, for lying to the FBI. The department’s argument was so preposterous that within days, nearly 2,000 former department officials signed a letter in protest of William Barr’s “assault on the rule of law”. READ MORE

The cases involve efforts by House Democrats and a N.Y. prosecutor to obtain the president’s documents.

The U.S. Supreme Court seemed prepared to rule that Congress went too far in seeking broad access to President Donald Trump’s personal financial documents but that a New York prosecutor may be able to get his tax records.

The justices heard three hours of argument by telephone conference call, and lawyers for the president seemed to find more traction for their claim that Congress does not have unlimited authority to issue subpoenas, especially when a president may find it distracting to respond.

The Democratic majorities of three House committees are seeking several years’ worth of financial records from Mazars, the Trump organization’s accounting firm, and two banks that loaned money to Trump businesses, Capital One and Deutsche Bank. READ MORE

America is reminded daily that Trump and his team of elected officials will do any thing to keep his financial records out of the public eye. He has broken every sworn statement made to the office. Predictions are also made he will do any treacherous thuggery to keep those records out of prying eyes. With all of that said, the American voter will see willful destruction of the election system in 2020. Trump must win to keep him, his family, and associated senators out of prison. Should he lose, foreign influences will be revealed triggering treason investigations.

This government appears corrupt to the core legitimized by religious leaders anointing him with a spurious sense of morality. Trump continues to impose a wide array injurious actions rendering this Democratic republic to be dictated policy which shackles present day law.